To be the missing link between Martha and Jon Stewart.

Sarah Lawrence graduate. Contemplated Bard but it seemed too rigorous, and Sarah Lawrence was closer to my brother’s pull-out couch in the East Village. 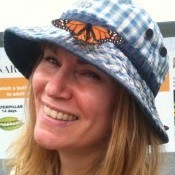